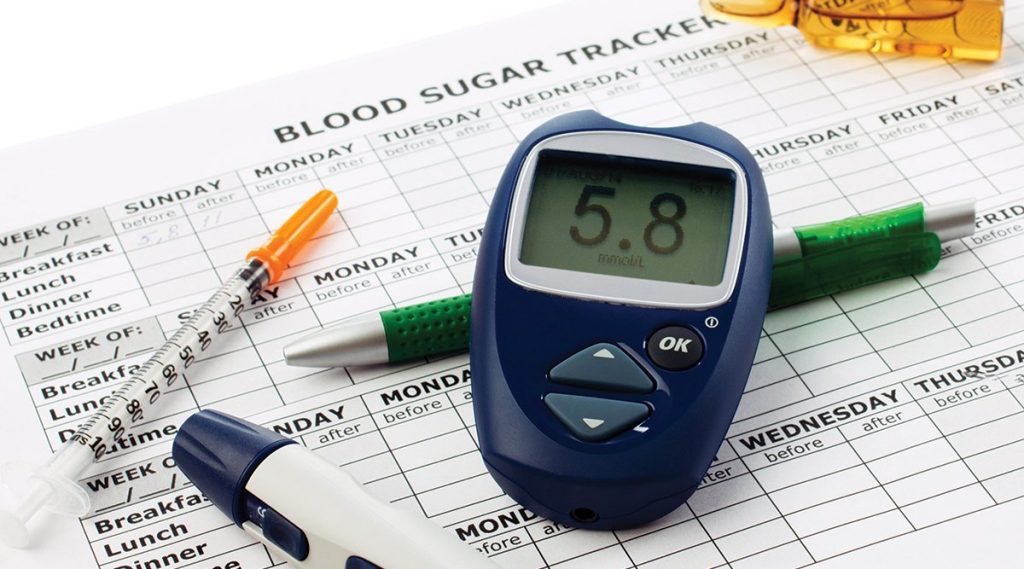 About nine years ago, California-based longhaul truck driver Richard Hall was in for a big surprise when he got his first Department of Transportation medical exam.

“You should be in a coma,” the medical examiner said, looking at the results of Hall’s bloodwork. “He told me my blood sugar level was 392, and that I’m diabetic.”

Needless to say Hall, 50, a former physically active construction worker before becoming a truck driver, was shocked. Like many truck drivers, Hall had no idea he was diabetic, or that his blood sugar levels were dangerously high.

Doctors and diabetes experts say Hall is one of a growing number of truck drivers and Americans in general who either have no clue they have Type 2 diabetes — by far the most common form of diabetes — or might be ignoring some of the more common signs of the so-called “lifestyle”disease. Unfortunately, even some drivers who have been diagnosed with diabetes are taking chances by not watching their weight, not eating right and not exercising, according to experts.

Diabetes is a disease in which the body’s ability to produce or respond to the hormone insulin is impaired, resulting in abnormal metabolism of carbohydrates and elevated levels of glucose-surge in the blood and urine. It can be detected in a urine or blood test, or at home by pricking a finger, putting a drop of blood onto a test strip, and inserting it into a glucose monitor.

“Early on, you’ll feel fine, until one day, boom, your body is going to crash,” said Kay Pfeiffer, senior vice president at TrueLifeCare of Brentwood, Tenn., a firm that helps employers and employees wrestle with the impact of diabetes.

“Medications are a temporary solution,” Pfeiffer told Transport Topics. “Diabetes not managed, sooner or later, something is going to happen.”

For instance, untreated diabetes is one of the leading causes of blindness.

“If blood sugar is too high for too long, you run the risk of having damage to the eyes, the kidneys and the heart,” said Natalie Hartenbaum, a medical doctor and recognized expert in occupational fitness and truck driver health. “Those that can’t control their blood sugar will generally end up on insulin.”

Hall says diabetes has not interfered with his driving. But he only drives about nine hours a day to avoid getting fatigued.

Because of his diagnosis, Hall was only given a one-year medical card, rather than the two-year card that a healthier diver is typically given after passing a medical exam administered by one of the more than 50,000 certified Federal Motor Carrier Safety Administration examiners. About 43% of drivers have a medical certification of one year or less, according to David Thorpe, a Fayetteville, N.Y., chiropractor who has trained more than 5,000 FMCSA certified medical examiners in his career. Thorpe has focused his medical practice on drivers and occupational medicine for over 30 years.

So why is diabetes such a prominent issue among drivers? “The answer is it’s a stressful job, a lot of time away from home, poor eating habits, drivers are notoriously overweight, and in poor health in general. Plus it’s an aging population,” Thorpe told TT.

Thorpe said that diabetic drivers can sometimes be managed without drugs, but it’s not uncommon for them to receive oral medications. “Oftentimes they work very well, other times they don’t,” he said. Even when taking drugs, Type 2 diabetics need to take care of their health, Thorpe said.

“Really, we don’t know that much about Type 2 diabetes,” Pfeiffer said.

The medical experts do know this: There is no cure for Type 2 diabetes. It’s a disease that requires those who have it to eat healthy, keep their weight in check, and exercise. “You have to get in front of diabetes. You have to have the will to manage diabetes,” Pfeiffer, a former hospital nurse, told Transport Topics.

Type 1 diabetics, believed to be only about 5% of the U.S. diabetic population, are dependent on insulin to stay healthy — and risk almost certain death if not taking it.

But in a way, Type 2 diabetics have a tougher battle ahead of them because they must radically alter their daily lives. 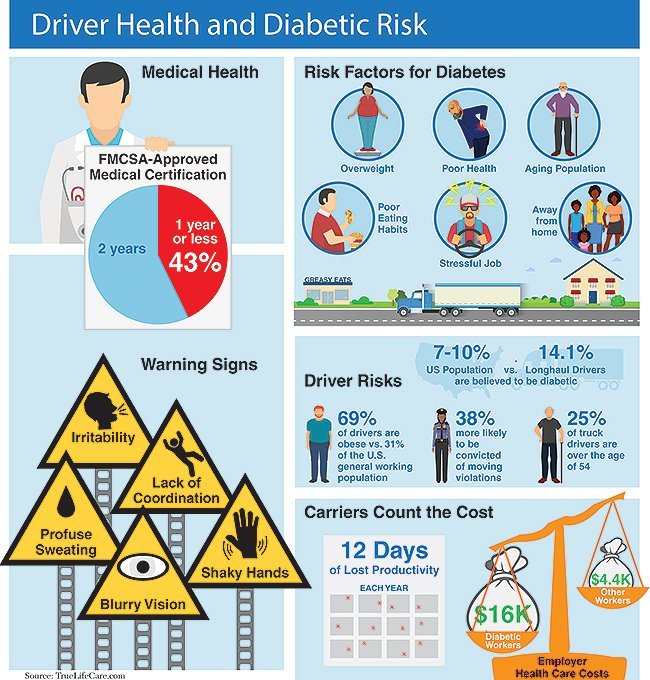 About 25% of truck drivers over the age of 54 are diabetic, according to numbers compiled by TrueLifeCare.

This past June, an FMCSA-sponsored Virginia Tech Transportation Institute study, “Commercial Driver Safety Risk Factors,” used data from more than 21,000 drivers to help understand the impact of health and other challenges for those sitting behind the wheel.

While the study concluded that treated diabetic truck drivers are at no greater risk of accidents, it noted that those same treated drivers were 38% more likely to be convicted of a moving violation compared to drivers who do not have diabetes or elevated blood sugar.

The study further concluded that diabetic drivers not being medicated for the disease had a threefold increased crash risk.

While there are many good reasons for drivers such as Hall to keep their blood sugar in control, diabetes is an issue for the whole country, not just truck drivers, said Larry Wolfe, a retired medical doctor who specialized in endocrinology nearly his entire career. Wolfe was a staff doctor at the Vanderbilt University Diabetes Center for 10 years.

“It’s almost an epidemic,” he told TT. “Truck drivers tend to be obese, don’t exercise, they eat wrong, so their diabetes is a real problem to manage, even under the best of circumstances. The major fear always was that they could experience hypoglycemia and lose consciousness while they are driving.”

Pfeiffer said when some drivers feel symptoms of the disease, they sometimes stop at a convenience store and get a Coke.

That’s why Hall, who spends three months at a time away from home hauling dry goods across much of the country in his tractor-trailer, says he tries to eat mostly chicken and fish and avoids sweets to do the best job he can to control his blood sugar. And when he gets home, he visits his doctor.

“To get exercise, I even walk around the truck three times to do my pre-trip,” Hall said. The last time he checked his blood sugar level, it was 182, a little high, but he has registered up to 249. The American Diabetes Association (ADA) says a normal blood sugar reading for an individual fasting is 100 or lower. If the level is 126 or higher after fasting for eight hours or more, a person could be diabetic.

There also is another problematic issue related to diabetes: It adds costs to an employer’s bottom line, according to the most recent diabetes report by the Health Care Cost Institute. The per capita annual spend in 2014 for people with diabetes enrolled in employer health plans was $16,021 (combined employer and employee). That’s nearly four times the $4,396 per capita spend for health plan members without diabetes.

The ADA states that people with diabetes typically will experience three additional days of absenteeism and have 12 days of lost productivity each year associated with the disease.

“Diabetes goes along with the epidemic of obesity,” Wolfe said. “And unfortunately, we won’t be able to get a good handle on the treatment of Type 2 diabetes until we get a handle on how to treat obesity. That’s the real problem — that we don’t know how to get people to lose weight. If we could, there would be a whole lot less Type 2 diabetes.

Wolfe said a person can have Type 2 diabetes for 10 years and not know it. Since it is possible for drivers to not have symptoms, the easiest thing for some of them to do is deny having the disease. It’s a very frustrating practice to take care of truck drivers, he said.

Wolfe added, “It’s a disease where the patient has to assume a lot of the responsibility for treatment. It’s a complicated disease because it requires you to think about it every day of your life. If you don’t take it seriously, no doctor in the world is going to help you.

“What was really sad for me as a physician was when the poor patient was in the position of having to choose between his health and making a living,” Wolfe said.

From a regulatory standpoint, FMCSA relies on a driver’s treating physician and the medical examiners to ensure that drivers who take insulin and those who don’t take it all have a stable medication and treatment regimen prior to medically qualifying them to get a medical card.

Federal regulations require that insulin-treated diabetics fill out an assessment form in which the driver’s treating clinician must attest that the driver has a stable insulin regimen and well-controlled diabetes. The form poses a series of diabetes management-related questions that can aid the medical examiner in deciding if a driver is fit to get behind the wheel.

Hartenbaum said she believes that since there are no specific federal guidelines for medical examiners, the so-called “best practices” used by medical examiners to qualify a driver can vary.

Because of the lack of specific federal guidance, Hartenbaum said she is “very concerned” that there may be an increased crash risk for diabetics. “But it hasn’t shown up yet,” she said.

This site contains copyrighted material the use of which has not always been specifically authorized by the copyright owner. We are making such material available in our efforts to advance understanding of health related issues for the Trucking industry, etc. We believe this constitutes a ‘fair use’ of any such copyrighted material as provided for in section 107 of the US Copyright Law. In accordance with Title 17 U.S.C. Section 107, the material on this site is distributed without profit to those who have expressed a prior interest in receiving the included information for research and educational purposes. 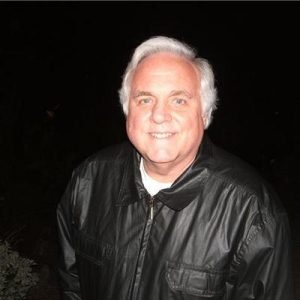 Eric Miller has been a reporter and writer at publications nationwide for 40 years. He’s been at Transport Topics the past 11 years, currently on the paper’s government team; worked as a reporter at the Dallas Morning News; reporter, editor and member of the investigative team at The Arizona Republic; reporter at the Tampa Tribune; city editor at the Santa Fe New Mexican; and senior writer for D Magazine in Dallas.
Learn More about Transportation Topics

“What was really sad for me as a physician was when the poor patient was in the position of having to choose between his health and making a living.” said Larry Wofe, retired Medical Doctor. Jon Slaughter, CEO of Healthy Trucking of America says, “Obesity is the gateway to more severe chronic diseases. Becoming symptomatic to Type 2 Diabetes can be reversed, however a sedentary and stressful profession like trucking doesn’t help.”

Enroll in the national dpp